2 Guns is a standard by the book action film for the most part. There’s nothing original to be found. What saves everything from simply falling into the back of my mind of being just another forgettable B-movie, is the chemistry between the two leads. Denzel Washington and Mark Wahlberg were phenomenal on screen together. Whether their kidding around or being serious, anything they did meshed together seamlessly. The weakest parts of 2 Guns comes when one is on screen without the other. Both hold so much life and energy, things start to get boring quickly. Thankfully, the separations never last long. I loved watching them and hope the duo is seen again.

Bobby (Denzel Washington) and Stig (Mark Wahlberg) are partners in crime on the Texas/Mexico border, brokering drug deals with cocaine kingpin Papi Greco (Edward James Olmos). They are also planning a robbery. They will rob the bank where Papi has three million dollars stashed. During the midst of the heist, both discover that each had hidden there true identities. Bobby is in fact a DEA agent, and Stig is a former NCIS petty officer. Instead of the three million, it turns out forty-three million was there. All that money belongs to a mysterious villain who will kill anyone to get his money back. As certain alliances are revealed Bobby and Stig find out they have no choice but to trust each other and work together to bring their enemies down.

The story isn’t that important when you get down to it. It starts out alright, but then gets way too convoluted. Lots of twists, turns, and flashbacks take place that cloud up the plot. It became plot-heavy, so I noticed how convoluted it was. It was a fun convoluted, though. If you simply go along for the ride, it’s enjoyable. What helps this is the characters. The central characters were likable and written well enough to get behind and want to watch. The script should have completely pushed any plot further in the background instead of it being directly in the forefront along with the characters. 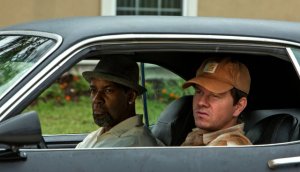 I wonder who Denzel is going to get into a car for his next action movie?

The climax wraps up very quickly and does something that I don’t like. I find in annoying when a plot wants to be complicated all the way through, but goes for a fast end that doesn’t make sense at all. At times the story seemed like it could be going somewhere – never really did. I’m not saying all stories have to be complex. If a film’s going to intentionally go for that, however, than it should at least attempt to finish it while making sense of what occurred the whole movie. I wasn’t expecting something good in this department, but movies similar to this would benefit greatly from more focus there.

Mark Wahlberg was playing up his comedic side for the most part. It seems lately, his comedy roles have shined and his drama has been pretty bland. I’d rather see him in stuff like this and Ted, then say Contraband. If given a solid screenplay, Wahlberg can run with it provided lots of laughs. As always, Denzel Washington does a solid job. Has a level of confidence mixed in with wily energy that reminded me some of him in Training Day. Don’t mean to compare performances, only see similarities. Paula Patton is given the short end of the stick regarding material, but still does fine. Edward James Olmos is fairly bland. Merely serves the purpose of your standard cartel lord. Acting was the best aspect 2 Guns had going for it. Even with the supporting roles lackluster, the two stars contributions were beyond huge.

You’ve seen this done before, but this time its Washington and Wahlberg doing it. If you’re a fan of either of those guys, then this is a safe bet for you. During the development, Owen Wilson and Vince Vaughn were actually cast instead of them. Everything would have been massively different if that happened, glad it was changed. I love that duo too, but not for this. When judging B-movies, I try to gauge them by how much fun I had. 2 Guns was entertaining all the way until the end. The car chases and gun battles were well made. I could tell what was going on in detail, which is always a plus nowadays since directors overuse shaky cam often. Numerous films are watered down because PG-13 makes a bigger profit than anything R-rated most of the time. I’m glad this wasn’t. Overall, 2 Guns is a good enjoyable popcorn flick.